Joey is now making it 5 1/2 hours overnight - Richard took him out at 5:30 but he was a wiggle worm when he came back to bed so I got up and took him out again and he did a big poop. I think I've finally figured out his routine - when he gets up "in the morning" (5:30) he needs to do everything and eat. He then settles down after about 15 minutes and takes a nap until 7 and then he's "up". He peed and pooped again and now he's playing happily with his toys (actually he's also whining and scratching at my leg - which I'm ignoring)

It's cold and raining this morning.

Yesterday I began to try to understand Instagram and I set up an account. I then figured out how to get the code into my site. There are a lot of protections (I have two firewalls) to prevent it but I finally got it. I can see how we can use Instagram for pictures instead of uploading them to our server.

I ran out yesterday and returned the Good Feet stuff - Joey survived and I think now I will run errands when I need to. I'm sure he doesn't like it, but he's no worse for wear.

For the last several days there have been frequent efforts to gain access to Civil War Richmond (login failure). They come all together from many different IP addresses but they seem to be the same attempt. I guess there's a hacking program that can mimic IP addresses and put in common user names and passwords. It would obviously be a mistake to use "admin" or "password" anywhere! 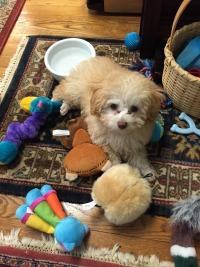